PerformYard offers robust performance review capabilities and for reviews to include review forms assigned to specific employees, managers, direct reports, and contributors. It is also possible to enable self-service 360 feedback from peers and other employees in an organization using 360 Review Forms as part of your review cycle.

The basic steps to leveraging 360s as part of your reviews are as follows:

4
Nominate and assign one or more employees as reviewers.

Creating a 360 Review Form is the same as making other forms in PerformYard. You will likely want to tailor the questions you ask of 360 reviewers vs. those you may ask of an employee's manager or contributor by creating a specific form for such reviews. You can learn more about creating forms here.

A recommended best practice is to name the form in relation to the roles or people who are expected to author them, for example, "Peer Review Form" or "Upward Review Form."

Add one or more 360 Forms to a Review Template. 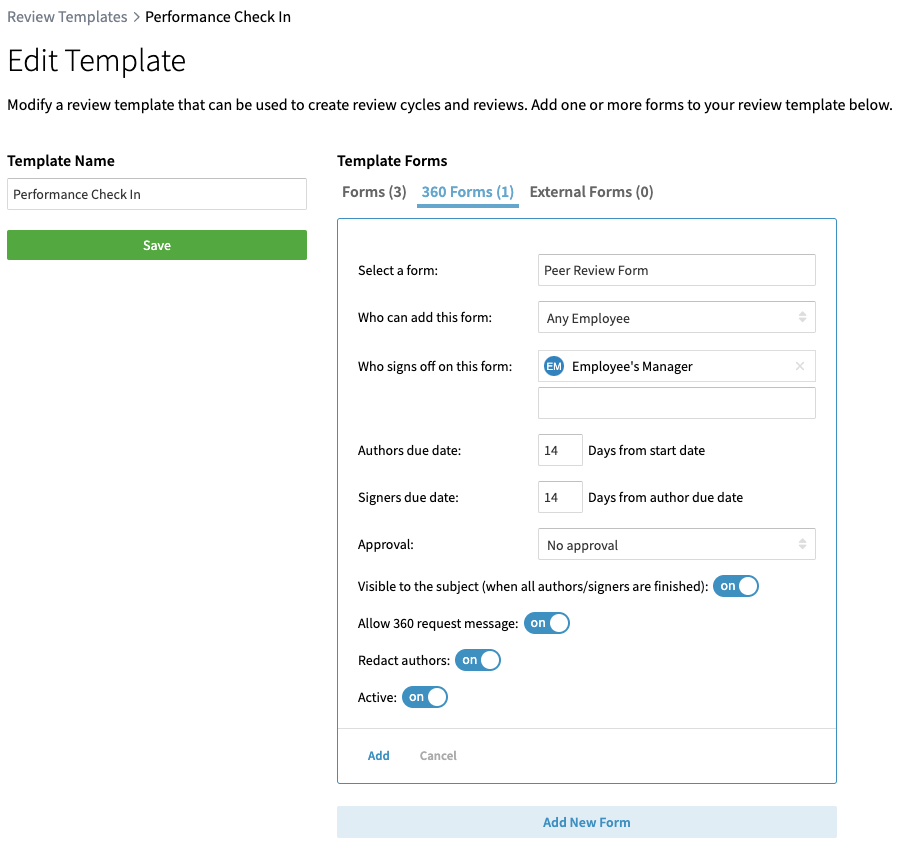 Choose who should be allowed to add 360 Form to a Review.

The ability for employees to add new 360 review forms for a subject can be controlled and scoped to include just the Subject, the employee's manager, or opened up to any employee in the organization. The available options include:

When this option is selected, any 360 Forms will go through the standard authoring and signing workflow. As with other types of forms, you can specify multiple signers.

Specify the due date for the 360 Forms.

Optionally, allow for a 360 Request Message.

The employee adding the 360 form can provide a message that will be shown to the nominated reviewer when this option is enabled.

When this option is enabled, the subject's manager or an administrator will need to approve any nominations for 360 feedback. There are three options with regards to approvals:

Lastly, if applicable, elect to Redact the Author.

The option to redact authors will hide the name of the authors of the 360 forms. The reviewer's name will be hidden from the subject and their manager. The subject will be able to see the feedback and form answers but will not know the author's name.

Please note, however, that administrators can view this information for other employees.

Once you have defined one or more forms for peer feedback and have optionally created a Review Template that includes one or more 360 Review forms, you can create a review cycle that provides 360 feedback.

The example below creates a review cycle using a review template that includes two types of 360 forms. 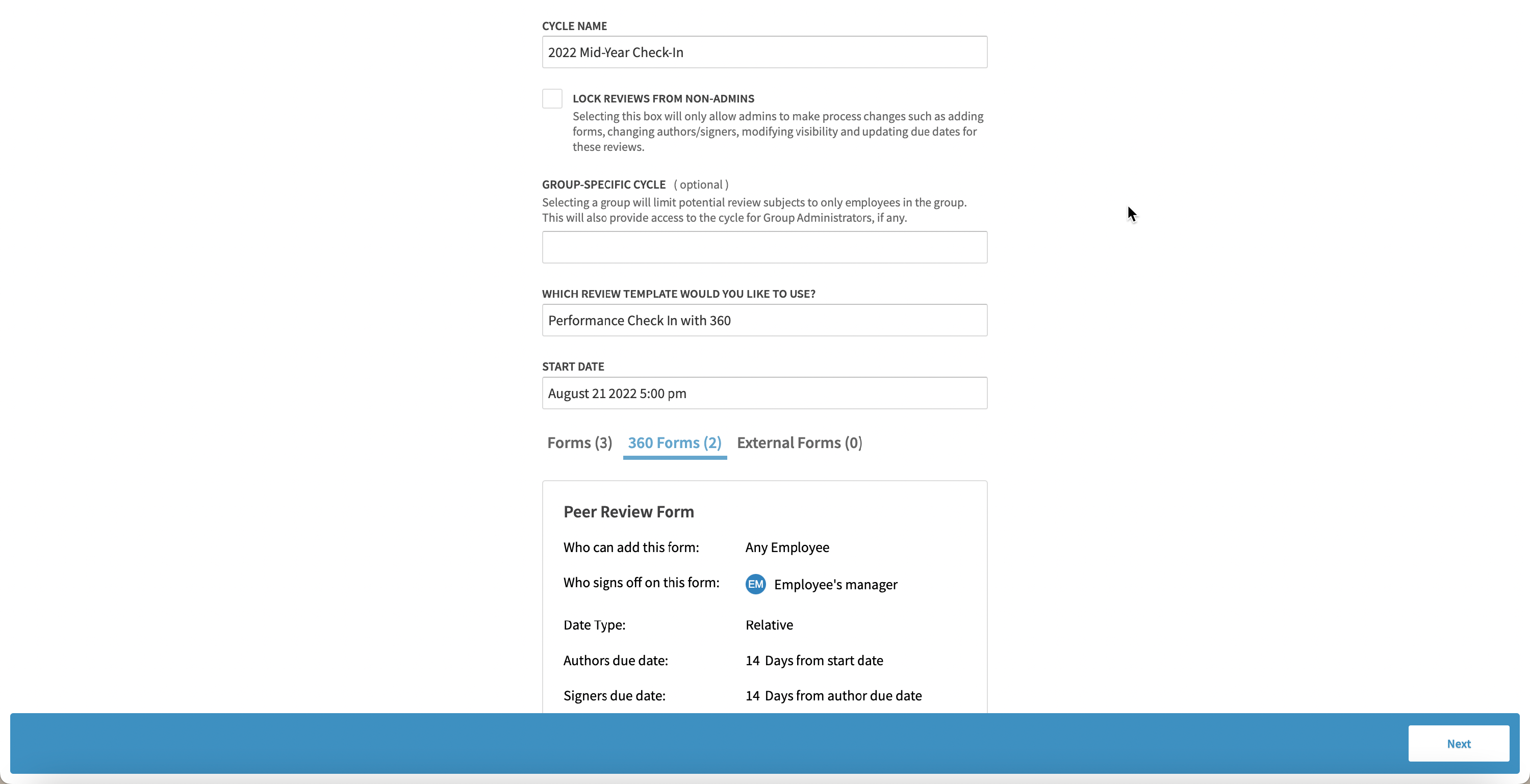 When adding 360 Forms into an existing review cycle, administrators can use fixed dates for due dates for authors and signers, as opposed to relative dates that are relative to when the form is assigned. Fixed dates are helpful for limited-time review processes, while relative dates allow forms to be added at various points as long as the cycle is still active.

Once a review cycle is created with one or more 360 Forms, the review cycle will be shown as being 360 Enabled and will, depending on the options selected above, enable a subject to nominate other employees to provide 360 feedback as part of their review.

Add 360 Forms to a Subject's Review

When an employee (subject) is part of a review cycle that includes 360 Forms, a new button will appear on the employee's dashboard. Depending on the settings selected for the Review Form above, the Add 360 Form button will only be shown to the subject, admins, managers, or all employees.

A 360 Form can also be added to a review directly from the employee's Reviews tab.

Once you select Add 360 Form, you'll be prompted to choose the review for the 360 feedback and the form to be filled out by the nominated 360 reviewers.

Depending on the selected settings for who is allowed to nominate employees and add 360 forms to a review, you'll either automatically be assigned as the author for the 360 Form, or you will be prompted to nominate and select employees to author 360 forms. 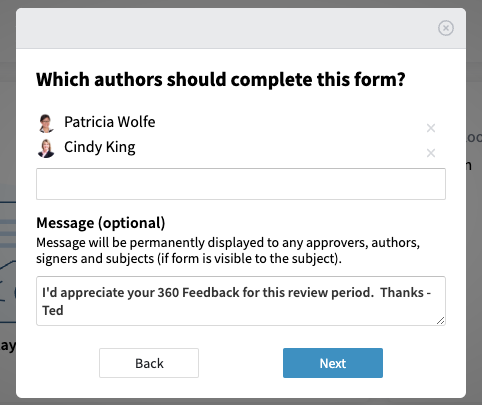 When a 360 Form was defined as requiring approval, a manager or admin, depending on the settings for the form, will first need to approve any nominated reviewers to create the review forms and assign them as authors. When approval is required, a message will be displayed stating that the requests were submitted for approval. 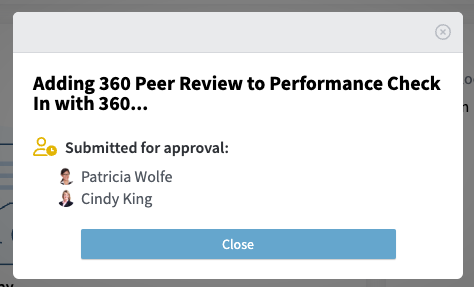 Managers can approve any 360 Forms awaiting approval by opening the subject's review and choosing to approve individual or all requests.

Authoring and submission of 360 Review Forms

Once a nominated 360 reviewer has been assigned a form and, if applicable, that request has been approved by the subject's manager or an administrator, that form will appear on the list of review forms they need to author, and those forms are authored and submitted like any other review form. Once submitted and optionally signed, the form and its captured information are available for viewing and use across the PerformYard application like any other review forms, including within Reporting & Analytics.

While 360 reviews are often leveraged for team peer reviews, they can also be used for 360 manager feedback and post-project reviews.

The 360 Review Form functionality can be used to implement a post-project review. The example 360 Form settings below show a review that allows a subject to nominate other employees to provide feedback about their performance on a recent project.

The 360 Review Form functionality can be used to implement a redacted-author upward review. The example 360 Form settings below will enable any employee in the organization to provide feedback about a subject (presumably a manager, which an admin can manage via approval.)

The 360 Review Form functionality is often used to implement peer feedback, either open to any employee or designated by a Subject's manager. In the example 360 Form settings below, a manager will initiate the selection of peer reviewers and gather feedback that is not intended to be shared with the subject.

The 360 Form functionality can also be used to create ongoing 1:1 check-in forms to be completed by an employee or a manager to capture notes from a check-in conversation. In the example 360 Form settings below, a manager would initiate a form to be filled out by either the employee or the manager.